Lynette’s love of choral music led to her branching into choral conducting whilst at university where she learnt her trade working with the Australian Boys’ Choir and the Melbourne Youth Choir, and was assistant conductor and co-founder of The Young Voices of Melbourne. She has participated in conducting classes and masterclasses with Roland Young, Berwyn Roberts, Robert Rosen and Ed Bolkovac. She is a member of the Association of British Choral Directors (ABCD). 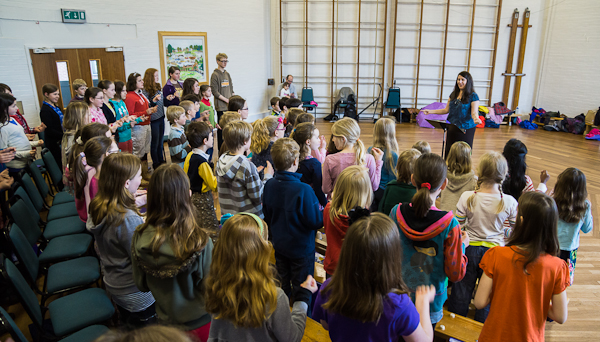 In January 2008 Lynette founded King’s Junior Voices (now KJV Community Children’s Choir), a free 95 voice mixed children’s choir, as part of the King’s College Chorister Outreach Project in association with Sing Up and the National Singing Curriculum. When government funding ceased in July 2010 Lynette drew together a group of Trustees and successfully applied for charitable status for King’s Junior Voices  and the choir has recently moved to a CIO under the name KJV Community Children’s Choir (Registered Charity Number:  1198653. We have given concerts in King’s College Chapel, West Rd Concert Hall, Ely Cathedral and St Andrew’s St Baptist Church. We have also performed alongside The King’s Singers in King’s College Chapel and broadcast on Classic FM radio and Cambridge TV.

Between 2008-2010 as part of her work for Sing Up (www.singup.org) Lynette worked as a choral animateur on behalf of the King’s College Choir Outreach Project in 25 Cambridge state primary schools preparing hundreds of children for performances in King’s College Chapel.

Since 1993 Lynette has conducted the choir of Wolfson College, Cambridge, building it up from a small choir of fifteen to the current fifty voice mixed choir. Past performances range from Bach’s St John Passion to a tour to Greece at the invitation of the International Society for Music Education, Mozart Requiem in Rome & Brahms Liebeslieder Waltzer in Hungary. In addition to their college commitments, the choir has sung in the Cambridge University 800th Prom, on BBC Songs of Praise and performed in Mahler’s Symphony of a thousand in Ely Cathedral and the Royal Albert Hall. An example of our repertoire includes Handel Messiah, Durufle Requiem, Vivaldi Gloria, Schubert Mass in G, Mozart Coronation Mass. In 2013 to celebrate 20 years conducting the choir we performed Purcell’s Dido and Aeneas. Since 1998 Lynette has been Director of Music at Wolfson where she is also a Fellow, Trustee and member of the Governing Body & College Council.

With the Wolfson College Choir and Orchestra Lynette has conducted works including:

My weekly vocal technique class Weekly Vocal Workout resumes this Friday after the Easter break – £5 per session, Fridays on Zoom 0930-1000 or in your own time on video. When I started this half hour weekly class for Choral Society members early in the 2020 lockdown I didn’t imagine it would still be going … END_OF_DOCUMENT_TOKEN_TO_BE_REPLACED